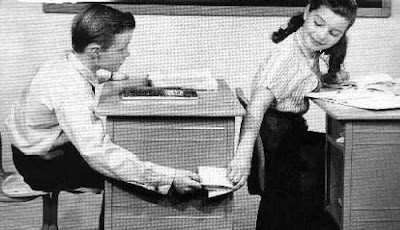 I don’t know where this quote originated. I read it via Debbie Stier whose Twitter stream I stumbled upon a few days ago — how I don’t remember, I just liked that in her profile, she described her profession as “Publishing Insurgent.”

I figured out how to feed my Twitter updates to this blog (see right), so those of you who don’t want to join the fray can still get a taste of it and click as you like on the various interesting links that pass through.

RT = retweet, meaning one is forwarding on someone else’s post. @whatever name = who one is responding to or talking about. Out of context, the posts may not make much sense. That’s OK. Just let the experience of reading them wash over you and whatever pleasure or horror sticks, that’s the point.

My friend Susan Ito blogged about the appeal of Twitter and Facebook today. She wrote, “I was always a sucker for passing notes in class, and writing observations in a notebook a la Harriet the Spy, and this is the grownup, high tech version of that.” Exactly.

I woke up happy, with this song blasting through my head. Perhaps you, too, would like to watch this video again.

Annalena and I went to the mall yesterday in search of a homecoming dance dress (alas, I’m not finding the winning Forever 21 strapless, black and gray-striped, silk bubble dress online to show you…14 year olds are the only creatures with any business wearing such a confection and junior rocks it). Anyway, it’s already Christmas at the mall. Normally, I abstain from holiday music until December 1st, but given the economy, I don’t begrudge the merchants for trying to stir up some early cheer.

I’m also making an exception to the no Christmas music before December 1st rule for Aaron Neville, who kicks off his Creole-spiced solo holiday tour on Friday, November 28st, 8pm at the Mahaiwe in Great Barrington. Backed by a quintet that features his brother Charles Neville on sax, Aaron’s show will focus on classics from his albums, Christmas Prayer and Soulful Christmas, alongside hits from throughout his five decades-long career. Click here for tickets.

I’m especially looking forward to hearing him sing songs from his recent album, Bring It on Home…The Soul Classics. Aaron says on his website, “These classic songs have been pumping blood to my heart from the first second I heard them. They’ve been a part of my life. Singing them, especially in the aftermath of Katrina, was a deeply spiritual experience. They helped me get through. They gave me hope. And for me, music has always been about hope.” 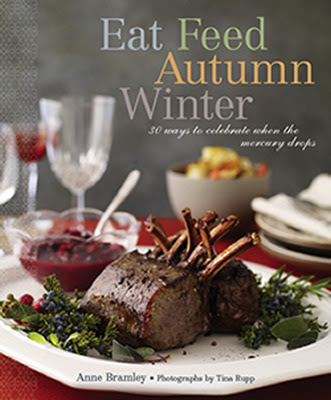 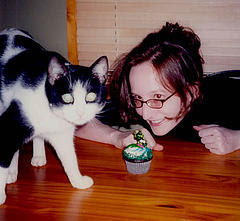 Anne Bramley is a food scholar, university lecturer, writer, cook, and host of the internationally acclaimed podcast, Eat Feed. She was born in a Midwestern blizzard and has thrived on all the best things cold weather provides, from her grandmother’s “snow ice cream” to deep-winter snowshoeing. She has also traveled the world, living in England, Germany, and United States and learning from each new food culture she encounters.

Eat Feed Autumn Winter: 30 Ways to Celebrate when the Mercury Drops is her first cookbook. Epicurious.com just named it one of the Best Cookbooks of 2008. She lives with her husband, daughter, two cats, and two dogs in Cambridge, Massachusetts, where they eagerly await the next snow day.

Gina: Your book is filled with lots of wonderful historical recipes. On election night, I had a good time reading your accounts of Lincoln’s Inaugural Chicken Salad, Washington’s Favorite Corn Cakes, and Jefferson’s Peanut Sundaes. Where did you track down these gems? Also, what did you end up serving at your own election night get-together?

Anne: As an academic, I’ve always got my head in some archive or other and tend to collect bits and bobs of culinary history since you never know when you’ll want them. And as a former Chicagoan (and Hyde Park resident) my election night was inspired by some of our favorite foods from the city and neighborhood.

Gina: In your acknowledgments, you mention that novelist Katharine Weber gave you an early boost. How did you meet her and how did she help you?

I met Katharine through Readerville. She is always there with ready and willing advice about the writing life — agents, pitching, publicity, and more — and she’s always generous in lending an ear as well as a hand to a new writer. Plus she has sent me some of my best podcast topics and guests.

Gina: I’m charged with bringing cranberries to Thanksgiving dinner at my mother-in-law’s house this year. I know you love the topic of cranberries. Please tell me how should I cook them and share with my readers why you think they’re so interesting.

Anne: Every way and in everything! I love that they are really one of the few remaining foods that have a season that you can’t industrialize your way around. At least as far as I’ve seen, they aren’t shipped in from the southern hemisphere as with things like raspberries. Instead, I long for the October harvest each year and then try to do as much as possible before they’re all gone from the shelves in January or February.

When I have the ability to cook just cranberries and not have something else in the oven, I love to do low temp, slow cook with a bit of spirit at the end. I don’t really have a recipe and tweak it every time, but do something like a pound of cranberries with 1/2 to 1 cup of brown sugar for 1 to 2 hours at 200 to 225 degrees. Add a splash of alcohol in the final 15 minutes — brandy if you’re going for a Jeffersonian French inspiration, rum for something a bit more middle-brow colonial. The key thing about the low temp for a long time is that the berries don’t pop and go mushy like in a stovetop sauce. Instead they just gently warm and soften. Mmmm. (Also, I know it’s a big range on the sugar, but people have wildly different sweetness desires when it comes to cranberries and I prefer mine a bit tart, vaguely reminiscent of the kind of tart sauces that historically accompanied meat like verjuice in the Renaissance or a 19th-century gooseberry or rhubarb sauce.)

Gina: What is your favorite winter cocktail?

Anne: When I’m looking for some vitamins with my vice, it’s a Bloody Mary made with Scandinavian aquavit (like the Bloody Sigrid in the book). But oftentimes I just want something really warm, creamy, sweet and possibly nutty, so I wrap myself around whatever boozy milk punch is on offer.

Gina: What’s next on your proverbial plate?

Anne: Getting a position in the new administration as the local seasonal food czar. If that doesn’t work out, endless meals with great cold weather foods and a little bit more time with my husband and toddling daughter and our menagerie of 4 animals who are often lounging in front of the warmth of the oven waiting to see what experiment pops out next. 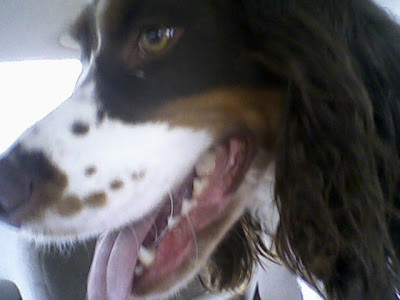 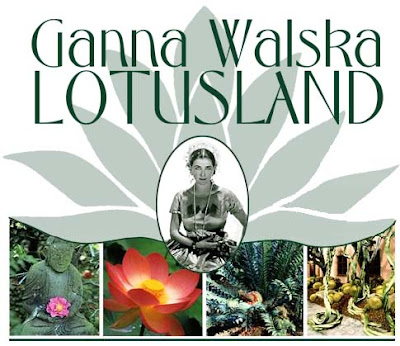 As I type this entry, a wildfire rages in Santa Barbara and my thoughts are with Lotusland, an extraordinary garden that seems to be in the fire’s path. I took Dave there for his birthday years ago. It would be sad to lose this historic treasure. If it survives and you haven’t visited, I suggest you book a trip there pronto.

I spent the week at an organic juice purification retreat at Kripalu doing research for an article. I’d never fasted before and it was…challenging. I found that the detoxification process made me queasy (a symptom that, according to the instructor, meant my gallbladder was purging). My sense of smell became so acute, I couldn’t stomach the potassium-rich root vegetable broth or the enzyme-laden green juice spiked with spirulina. Even the ginger tea didn’t sit well. I mostly stuck to lemon water, Emergen-C, and millet. After four days, I emerged radiant, five pounds slimmer, and a little loopy, craving yams and chicken soup.

While the experience was interesting, I can’t imagine wanting to repeat it…except for the lemon water part, which I’ve vowed to keep drinking every day. I’m quite convinced that it, salsa music, and walking Goose in the woods, are key to my mental, physical, emotional, and spiritual health.

I hope you all are well. Thanks for stopping by.

“We are relieved to let you know that Lotusland has survived the devastating Tea fire. We would like to express our most sincere gratitude to the brave firefighters, police, sheriff, and all departments involved in the heroic effort to save lives and property. For further information please check www.montecitofire.com.”

Duncan Sheik to Perform at the Mahaiwe

Next Saturday, November 15, singer-songwriter-composer Duncan Sheik will perform selections from his hit musical, Spring Awakening (which won eight Tony Awards in 2007 ), along with other original material, at the Mahaiwe in Great Barrington. Spring Awakening original cast member Lauren Pritchard will join him for the concert. How fun is that? Be there!

And please consider joining me as a friend of the Mahaiwe, which just lost $150,000 of its funding due to state budget cuts. We are so lucky to have this gem of a venue in our little town.

O to Joy from Ben Hillman on Vimeo. 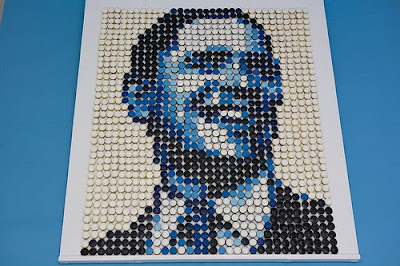 Zilly Rosen of Zillycakes in Buffalo, New York, built a likeness of our now President-Elect Barack Obama using 1,240 cupcakes. Click here to read an interview with the artist-baker.

I feel proud to be an American this morning.

I’m posting these photos with the grudging permission of my daughter. For the record according to her: I am the most annoying blogging mother e-v-e-r. But isn’t she cute? 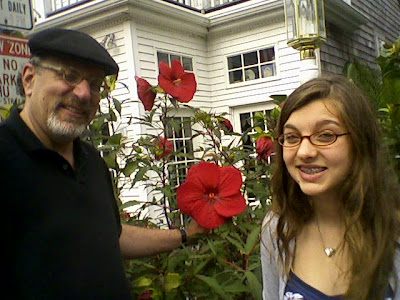 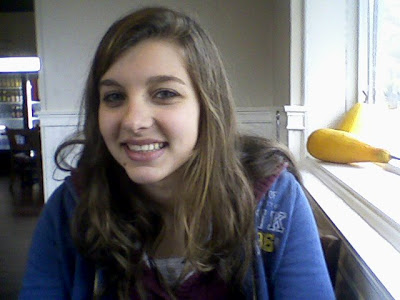 Look out, world. Baby’s got contacts and a metal-free smile. We celebrated the unveiling of her straight teeth this morning with hot chocolate at Haven in Lenox.