The hashtag #lameclaimtofame surfaced yesterday on Twitter, prompting a flood of lame claim to fame memories for me:

I trespassed the Akropolis and made out with the Fulbright Director’s son at two in the morning.

I was an extra in a Fisher Stevens After School Special.

My father was the runner-up Marlboro Man.

Harpo Marx once stood up my father.

I once drove Linda Hamilton to a radio interview. We talked about the horror of teen girls self-cutting.

I am distantly related to Pocahontas. Seriously. My brother did a genealogy chart.

The wife of MTV founder Bob Pittman asked for a bulk discount on my Day of the Dead Box to give it as party favor at her husband’s 50th birthday party.

The intern on my incense book worked as nanny for one of Danielle Steele’s daughters. She had to sign a serious confidentiality agreement.

A friend of a friend of mine once got set up on a date with football player Joe Montana.

John Shea was sweet with my daughter after a Symphony Space Selected Shorts reading at The Mount. He showed her how he marked his script with where to breathe.

I chased after Ruth Reichl at Spencertown Academy to tell her she’d left her lights on. She replied: Lexus turns itself off.

Realizing that I have too much respect/sympathy for Jodie Foster to post my lame claim to fame about her.

I saw Andre 300 (lead singer for Outkast) in the Windows Lounge at the Four Seasons Los Angeles.

When I was 17 and she was 19, I sang a duet with Joan Osborne in a feminist experimental musical about teenage alcoholism in Omaha.

I acted in a student film made by Charles Eames’s grandson.

I went to high school with Benjamin Bratt (he knew me a little) and Naomi Wolf (she didn’t). Other alumni of our high school (Lowell in San Francisco) include Carol Channing and Bill Bixby (the Incredible Hulk).

My English landlord in Oakland had as a young man dated Julie Christie.

I eavesdropped on Cameron Diaz talking about her sunscreen woes in the locker room at Canyon Ranch.

Sam Shepard once gave me his seat at a sold-out Joseph Chaikin production at the Mark Taper Forum.

I once passed Jerry Brown on a trail at Esalen. And I saw Leo and Gisele canoodle in a pool in Baja.

In summary, at Idyllwild School of Music and the Arts: I was Jessica Capshaw’s counselor and I checked Juliet Prowse and Gene Hackman (not together) into adult art camp. Richard Pryor’s daughter, Rain, was there, too.

Susan Orlean may be distantly related to William Shatner, but I took ballet classes with his daughter at summer camp in Colorado.

My father once saw Marilyn Monroe cross Washington Square (actually, I don’t think this is lame).

My great great grandfather chatted with the Emperor of Brazil on a park bench in Rio.

I once dated a boy who knew Jerry Garcia’s daughter. Said she looked just like him.

I waited in a checkout line behind Annie Lennox at Bell Market on 24th St. in San Francisco (sighting disputed by husband).

My mother-in-law has seen Tom Cruise and Meryl Streep (not together) at LaBonne’s Market in Salisbury, CT.

I’ve spotted Al Roker and Karen Allen (not together) at the Great Barrington Farmers’ Market.

I saw Jane Curtin in the parking lot at Guido’s in Great Barrington.

I fondled apples next to Sam Waterston at Guido’s in Great Barrington.

I waited in line behind Daryl Hall for the butcher at Guido’s in Great Barrington.

I snuck into Sammy Cahn’s house  (invited by friend who was housesitting) and hoisted his Oscars (they’re heavy).

I had dinner with the inventor of the Pill. He recited a poem he’d written about his poet wife’s legs.

I went to junior high with Bill T. Jones’ niece. 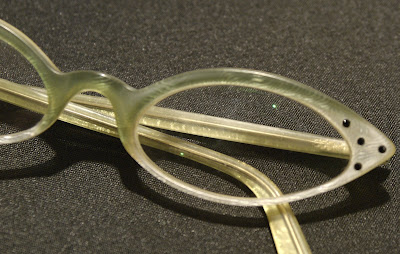 My glasses frames sprouted an irreparable crack over the weekend. I called Dave from the Petco parking lot in Pittsfield to report the sad news. He tried to comfort me with “honey, you are more than your glasses,” but I wasn’t so sure. These weren’t just any glasses. They were the best glasses in the history of glasses, or at least the history of my face and glasses.

I found them at Next Eyewear on College Avenue in Oakland six or seven years ago. As I recall, I didn’t really need new glasses at the time and I was broke as usual, but when I tried them on, there was something so extraordinarily right about them, so me only better best self about them, that I whipped out my credit card with the justification: no one will deny me if I’m wearing these glasses…which actually more or less proved true, plus they generated an incredible amount of good will and conversation.

Literally hundreds of strangers, from all walks of life and of all races, thought enough of my glasses to stop me on the street or on the bus or in the spa locker room to compliment me about them. Society matrons. Homeless men. Hip baristas from coast to coast. These glasses helped me learn to graciously accept a compliment. I’d smile like I’d never heard it before, look the person in the eye, and offer a sincere thank you in return.

It’s hard to say what exactly made these glasses compelling to such a wide range of people. All I know about their origin is that they were French and one of a kind. There’s no label on the frames. I just sent the above photo to Next Eyewear hoping that someone there will recognize the designer.

The glasses were subtly spectacular. They did a slow burn. When they caught people’s attention, the design somehow made them look closer. The liquid green pattern, the not quite cat’s eye shape, and the flirty black rhinestones combined with the feng shui of my face in a mysterious way that compelled people to talk to me.

I’m not a particularly fashionable or put-together person and sometimes the compliments felt like compassion…like the people thought: damn that geeky girl got something right, let’s prop her up and celebrate.

These glasses let me walk into any room and know that even though I might not be the smartest or the prettiest or the best writer or the most patient mother, odds were I’d have the best glasses. I will miss that power. 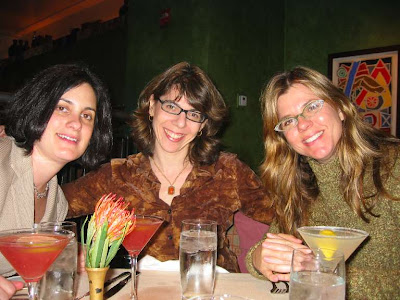 Looking through a folder of old digital photos this evening, I stumbled on this shot of Susan, Anne, and me celebrating the almost-sale of Searching for Mary Poppins and S’s and my 40th birthdays at Tabla in New York. I’m wearing the fabled lucky green sweater, which will soon be transformed into a keepsake felted something thanks to Kari of Chixon.