Posted on August 18, 2008 by gina
Photo by Marion Ettlinger
Nani Power grew up in a small town in Virginia. She studied fine arts/painting in her youth, at Bennington College, and later at Nadia Boulanger’s Ecole des Beaux-Artes Americaines in Fontainebleau, France. In her late thirties, she took a writing class at Georgetown University with Liam Callanan and went on to publish Crawling at Night (Grove/Atlantic Monthly, 2001), a New York Times Notable Book of The Year and a finalist for The Los Angeles Times Book Award, as well as the British Orange Award. It has been translated into seven languages and is in film production.
Her first novel was inspired by a brief stint working as a chef at a Japanese restaurant. She felt haunted by the cultural difficulties an old chef encountered. She explains, “Although he had been educated so well in the art of sushi, because of his faulty English he was treated like an old fool and I could see the pain in his eyes.” From this emerged a powerful tale of urban alienation and love set in a Manhattan cityscape. She adds, “I was deeply affected by the respectful Japanese attitude towards food as a cultural icon. The intense dedication and perfection amazed me. And the chefs were mindful of my respect, teaching me as much as I wanted to learn.”

Her second novel, The Good Remains (Grove/Atlantic Monthly, 2002), was also a New York Times Notable Book of The Year, and a finalist for The Virginia Library Award. “In this book,” she explains, “I strove to paint an entirely different landscape than Crawling at Night. While Crawling at Night was about urban alienation, The Good Remains was about the connectedness of a small town. I also wished to pay tribute to Charles Dickens’ A Christmas Carol.”

The Sea of Tears, her third novel, was published in January 2005 by Counterpoint Press. “I felt a need to explore the only still ‘forbidden’ territory in writing—exploring the realm of true sentiment and feeling, without being hackneyed. A certain cynicism has been lauded in our culture as intellectualism, and I reject that concept. I also wanted to humanize characters from the Middle East, who I felt were being pigeonholed and overlooked culturally in the post 9/11 era.”

Her newest book is a travel/food memoir titled Feed the Hungry. It was published this summer by Simon and Schuster.

Nani: I started thinking about family recipes and what they meant to me, which led me to remembering lots of things surrounding those recipes. And I’ve been really interested in all my writing in how food creates and fosters memory. That even a bad recipe can be as loved as something good, because it’s churned in nostalgia and love. I had a friend who loved burned food because his mother couldn’t cook. I kind of like the taste of an unmelted slice of butter on cold toast because my grandmother made it that way. Makes you wonder whether we actually “fall” in love or create love around reality.

I also love reading books with recipes because somehow you become involved in the world of the book even more. And then, lastly, I found myself looking at my family’s methods of coping and wanting to understand it more closely. I don’t know if I understood more, but I saw my family more three dimensionally, and therefore with more compassion.

Gina: What is a Yellow Bird cocktail?

Nani: Well, it’s this luscious tropical yellow salve my family gulped down by the gallons when we would go to the Bahamas. It has lots of fruit juices, Galliano, and banana liqueur and as kids we loved to suck down the last bit left in my parent’s glasses. Plus, it always had a maraschino cherry in it, which, I’ve learned as a parent, produces some kind of ineffable food euphoria in kids.

Gina: Please share with my blog readers some of your thoughts about rice.

Nani: It’s amazing the many coats that lil’ ol’ grain can wear. I discovered it’s really important in sushi culture, maybe more so than even the fish, if that is possible. Sushi chefs initially suss out the quality of a sushi bar by the rice and the omelette (tamago) preparation. Perfect rice tossed with the right combo of vinegar, salt, and sugar really complements the right slice of toro, a mushy version degrades it. Then, later on, I discovered Persian cuisine and found a new style of rice—basmati rice melded with so many flavors—saffron, rosewater, barberries (think tiny cranberries), sour cherries…a typical Persian feast would include at least four different rice pilafs. I think rice has a soothing quality as well. Both of the above cultures eat a thin rice porridge when they are sick, and feed it to their children as their first food.

Gina: We met at the Sewanee Writers’ Conference nine years ago. It’s incredible to me how many people from that summer went on to publish books. In what ways did participating in that conference impact your life?

Nani: Basically, it kicked my ass energetically. I had kind of just started writing, had about 30 pages of a novel on my computer. When I saw the level of ambition there, I realized I had to get serious if I was going to do this. I kind of lost the amateur spirit and kicked into high gear. Everyone there seemed so driven and accomplished (including you, I remember that). Plus, I felt so at home. I loved that everyone there loved writing as much as I did.

I also learned that I really love air conditioning.

Gina: What are you writing now?

Nani: I’m working on a novel and also a book about Indian vegetarian cooking that I’ve learned from various Indian women in my neighborhood. 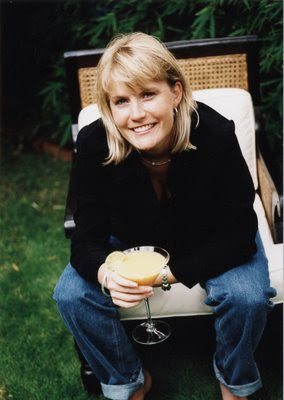 In 2002, she founded Liquid Architecture, a beverage consulting firm that creates signature drinks and bar concepts for a wide variety of clients, including The Atlantic magazine, Mont Blanc, Fox Searchlight, Warner Brothers, HBO, Comedy Central, and the Tribeca Film Festival.

You won’t find the standard neon green Appletini on her ever-changing bar card. Instead, this Alice Waters of bartending might shake up an Appletini using fresh-pressed apple juice with a dash of clove or cinnamon.
*******

Gina: What is your creative process for concocting signature cocktails for events? On your website, I see that you designed drinks for Maxim’s party with the Pussy Cat Dolls. Please describe the drinks and why and how your chose them. Did the event planner give any direction beyond “make sexy cocktails”?

Kim: I easily get inspired by taking trips to my local farmer’s market. A lot of the inspiration from my 101 books came from those trips. I would see some fresh, seasonal ingredients–like cherries, watermelon, cantaloupe, etc. and build a cocktail around it. For events, I can get inspired by a particular theme. For example, at the Maxim Pussy Cat Dolls party, I wanted to use some “sexy” fruits and aphrodisiacs –chocolate, cherries, martinis, and tequila. (Yes, tequila can be very sexy.) Sometimes I will incorporate a sponsor into a cocktail. For example, one party I did, Garnier Fructis (the shampoo) was a major sponsor. I created a “Fructini” made with various citrus fruits used in the shampoo–grapefruit, lemon, and lime.

Gina: How many cocktail resource books do you own? What are a few of your favorites?

Kim: I own a ton. A few of my favorites include:
Dale DeGroff’s Craft of the Cocktail
Ted Haigh’s Vintage Cocktails
How to Mix Drinks by Jerry Thomas (the Godfather of Bartenders)
Savoy Cocktail Book by Harry Craddock
Drinks by Vincent Gasnier (he has a lot of great recipes for various syrups and punches)
Joy of Mixology by Gary Regan
Mr. Boston’s Official Bartender’s Guide by Anthony Giglio

Gina: My father-in-law passed away this week. Are there traditional drinks associated with funerals, wakes, or grieving?

Kim: Good question. I think the best tribute to someone who passed away would be to toast with a drink that was their favorite. Savor those flavors that he/she really loved. (And that doesn’t necessarily mean it has to have alcohol.) I know at my funeral, I want people to be toasting with Margaritas made with a good silver tequila and fresh limes! (No salt.)

Gina: If you were a cocktail, what cocktail would you be?

Kim: I think I answered it above–a Margarita of course! It’s a casual, non-pretentious drink that can be enjoyed year-round. 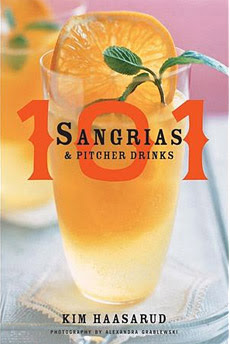 Place all of the ingredients in a large glass or ceramic container and sir well. Cover and refrigerate for at least 4 hours. Serve over ice in rocks glasses. Garnish with additional fruit if desired.

Combine all of the ingredients in a large glass or ceramic container and sir well. Cover and refrigerate for at least 4 hours. Serve over ice.

Tales of the Cocktail 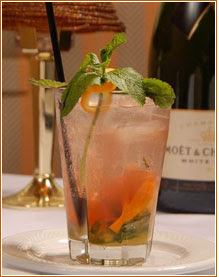 I’m writing a novel (there I said it in public, guess I actually have to do it) in which one of the characters is a mixologist. I would love to attend Tales of the Cocktail for research, but won’t be able to get away this summer. It’s an annual culinary and cocktail festival that celebrates the history and culture of cocktails and food in New Orleans, July 16-20, 2008.

I hope one of you will attend and send me a full report.

In 2008, new events will include a cocktail market, cocktail cinema, seminars on subjects including eggs in cocktails, absinthe in the modern era, beer cocktails, molecular mixology, and the first-ever International Symposium of Cocktail Shaker Collectors.