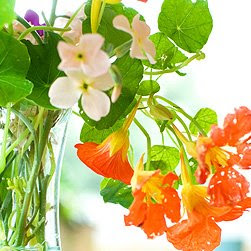 My friend Anne sent me a link today to the Fragrance & Film Festival competition. People submit short films that evoke specified perfumes and the winner gets $10,000 (sponsored by Vogue). It’s a curious concept — like making a commercial, yet not. If I were a film student, or just had more time on my hands, I think it’d be a fun exercise.

Chandler Burr is The New York Times‘ perfume critic. His new book, The Perfect Scent: A Year Inside the Perfume Industry in Paris and New York, tells two parallel stories–the first about a year Burr spent in Paris behind the scenes at Hermès watching legendary perfumer Jean-Claude Ellena create the Hermès scent, Un Jardin sur le Nil, and the second about a year inside Coty with Sarah Jessica Parker as she directed the making of her perfume, Lovely.

He speaks around the world on scent and perfume and hosts interactive master classes in gourmand scents; this series explains perfume for the lay person and shows fragrance’s structure and artistry, with food-based scent raw materials (absolutes of cinnamon, clove, pepper) and gourmand perfumes like Angel (which uses the scent of cotton candy) and Shalimar (the scent of vanilla) reflected in a seven-course gourmet meal.

Gina: The Perfect Scent is based on two magazine articles that you wrote for The New Yorker and T: The New York Times Style Magazine. In your acknowledgments, you say that you composed the book during one intensive October in Rome. How on earth did you do that? What sort of strategies did you employ to expand the articles? The book ends with the August 2007 launch of Sarah Jessica Parker’s second perfume, Covet. Did you write the book in October 2007 for January 2008 publication? I’ve never heard of a book publisher being so nimble. Why the rush?

Chandler: I had done a huge amount of work on both of the two tracks in the book–Hermes and SJP– by September 2006– both The New Yorker and The Times pieces had been published, and I had big chunks of text finished and knew what my stories were–but I needed a quiet, remote place to work. I have a very good friend, Laura Tonatto, an Italian perfumer (with, and I say this with the pride of a friend, a terrific collection; I’m not able to review Laura in The Times for obvious reasons, but here I can say that you should definitely smell her creations), and she has an apartment in Rome opposite a terrific restaurant called Il Corallo. So she called and invited me to assemble the book in Rome, and I basically hung up and called Delta and got on a plane as fast as I could. It turned out to be the perfect place to create the first full draft of the book.

In a sense I suppose I “expanded” the articles, but in another sense I contracted them. I had a vast amount of material, and my editor, George Hodgman, was a taskmaster on cutting, shaping, pruning, cutting some more. I just got an email last night saying, “Wow, it’s a page turner! Who knew the process could be so exciting!” and I’m of course very pleased that people perceive it this way– and it was, in a real sense, a page-turner for us living it–but that sensation is a very carefully-crafted effect gotten from a lot of hard work writing and a lot of hard work editing.

The fact that the book ends with the August 2007 launch of Sarah Jessica’s second, Covet, creates the illusion that the book is amazingly timely and the publisher amazingly nimble. Remember that the entire book was completed and in production. It’s actually very easy to put in that last piece right before it goes to the printer.

Gina: You say that perfume as a true art form has only existed since 1881 with the first use of synthetics in a French perfume and you make a very strong case for the virtues of synthetics — how they’re actually safer and healthier than naturals. Your rationale makes sense to me, but it’s so counter-intuitive in this era in which all things natural are considered to be best. Please talk about why you think synthetic scent molecules are great. And how do you feel about transfat and nitrates in food?

Chandler: The most important thing to point out is that perfume is not food. I’ll repeat that: perfume and food are two different things. The difference is that perfume is made up of molecules that do not interact with our biochemistry except in the most superficial way–there is a small interaction with pH balance, for example–and if it’s found that they do interact in any serious way, they’re banned. There’s a long and growing list of banned materials. Food, on the other hand, obviously goes directly into us, and the naturals argument is absolutely, indeed emphatically logical for food. Food by definition is something that must contain nutrients that evolution has designated necessary for our bodies, and you want it as natural and wholesome as possible. Perfume is art. Not food. And to demand nutrients and naturals in this art is about as logical as demanding them in the paintings we see or the music we listen to.

Gina: I was intrigued by your description of Jo Malone‘s fragrances as being “solidity shot through with light.” Also, that you said her scents were sometimes criticized as being more aromatherapy than perfume. Why is it a criticism for something to be called aromatherapy? What’s your favorite Malone fragrance?

Chandler: My personal favorite Malone is the French Lime Blossom. And “aromatherapy” is a criticism when it comes to perfume because aromatherapy is to perfume what John Grisham is to Ian McEwan; it is a much simpler, easier, more accessible form of the art, perfume in one case, literature in the other. I said this to Jo herself, and she sort of resisted it but on the other hand sort of accepted it. When you’re putting out scents that you explicitly say can be mixed with each other, you are by definition saying that they are less “worked” works of art, less finished, less elaborate, less singularly conceived, than others. Take Paris, by Sophia Gojsman for YSL. It’s an exquisite work, one meant to be shown off like a jewel. It’s no more created so that you can “mix” another perfume with it any more than the painter Lucian Freud would intend you to “mix” one of his paintings with another of his paintings. Each painting is a work, complete in and on its own terms. So are perfumes. Malone does scents, and they’re wonderful– they really are– but she’s set out consciously to create a world of products different in kind from traditional perfume and has done a very good job of it. 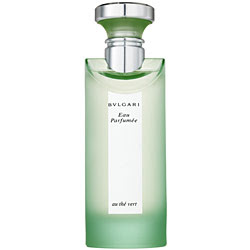 I’ve been obsessed with Eau Parfumée au Thé Vert de Bulgari since discovering toiletries scented with the fragrance at Four Seasons Los Angeles while researching my book, Pacific Spas. I made friends with a housekeeper there who kindly supplied me with extra green tea-infused soaps and tiny bottles of shampoo to bring home and I scored a sample of the perfume at the Bulgari shop on Rodeo Drive, which I nursed for two years before asking Santa to consider giving me a bottle for Christmas. Thank you, Santa.

I squealed with joy this morning when Chandler Burr detailed the history of master perfumer Jean-Claude Ellena’s creative process developing this scent, a process that included smelling lots of Mariage Freres teas.

Here’s how the Sephora website describes the perfume’s smell:

Here’s how Chandler Burr describes it in The Perfect Scent:

“…a smell as deep and strong and clear as Turkish seawater. The scent has power, a technical feat. Aesthetically it conjures a small amount of the smoothness of Darjeeling but gives in much greater proportion a rough, potent black tea from China; Bulgari’s marketers called it a green tea, but it has only the freshness of green tea, not in any way the scent. There is a vaporous trace of old wood smoke from the fire used to boil this pure water, and at the same time the scent is shot through with this freshness, which is why, as Ellena intended, it smells like tea and, simultaneously, it doesn’t. His idea was — explicitly — not to copy reality. His idea was to transform reality.”