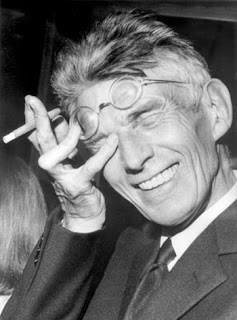 In general, I think of my job job serving as communications director for this esteemed theatre festival as being work. It’s often extremely fun, but it’s work (as Dave would say, that’s why they call it work). It’s the job that pays my mortgage, separate from my extracurricular creative life — it’s the state, whereas this blog is church.

Today, though, felt more integrated. I threw a press conference lunch for 30 journalists to announce the festival’s 80th anniversary season. 80 years! If you click on the link above you can see the plays — one powerhouse modern classic after the next (Shaw, Albee, Pinter, Beckett). One of the things I like best about my position is being able to ask the directors what interests them most about the plays in order to quote them in the press releases.

I enjoyed what all of the directors had to say this year, but I especially loved what Anders Cato said about the prospect of directing Waiting for Godot. Loved it in a church sort of way, so I’m going to take the liberty of quoting him here:

“The first production that I did at BTF was an adaptation of a Beckett prose piece called Text for Nothing, starring Joseph Chaikin. Joe was a friend of Beckett and the rehearsal process brought me very close to his musical language. It often felt like Beckett was in the room when we were rehearsing, listening, with his eyes closed.

I was thrilled when Kate approached me about doing Waiting for Godot. To step back inside Beckett’s world is, of course, very challenging. You have to step inside yourself and listen very closely. It’s a form of cleansing. Beckett’s rhythmical language helps block out all the distracting noise and clutter that we’re surrounded by, and guides you back to the essential. It is about communicating what can’t be communicated — something absolutely private and universal in the same moment.

Godot is not an esoteric exercise, but a deeply emotional piece. You have to make the audience feel and laugh and be completely engaged in each moment on stage. The questions have to matter. It isn’t a conversational game with clever turns, but a desperate search for solutions and answers, a search for a way out of the predicament that the characters find themselves in. Beckett’s world is physical and emotional. He said in an interview: ‘I’m no intellectual. All I am is feeling.’ I think that’s where you have to start with his plays.”

Isn’t that beautiful? I also think what he says about Beckett’s language would make a fabulous spa treatment.