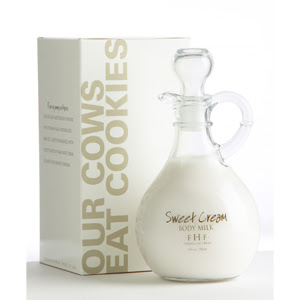 Here’s a conversation Annalena, age 14, and I just had about FarmHouse Fresh Sweet Cream Body Milk .

Gina: What do you think this stuff smells like?

Gina: Yes, I agree. It’s too sweet for me. What about you?

Gina: Do you think it’s best for teens?

Annalena: No, it’s not a youthful scent, but it smells yummy.

Gina: It says it has almond oil in it. Does it smell like almonds?

Annalena: Not really. There’s a slight hint of it, but the tangy, milky scent over powers the almond.

Annalena: It’s kind of a watery lotion. Not too oily. It’s really nice. It makes your skin freakishly soft.

Gina: What do you think of the package?

Annalena: I like that it comes in a little pitcher. It’s very elegant.

Gina: The copy on the box recommends using it with your favorite perfume.

Annalena: It’s pretty strong. The scent is mild, but it lasts for a while. I don’t know about mixing it with perfume.

Annalena: Well, to me $26 is a lot to spend on any kind of beauty product, but it’s a nice lotion. I don’t think it’s ridiculous except that spending that much on any beauty product is ridiculous. You’re paying for the package, which is really pretty.