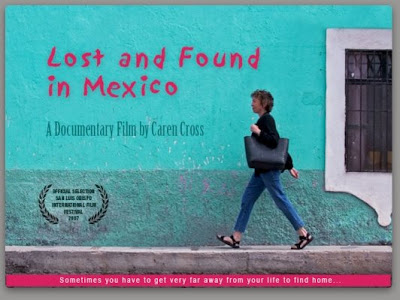 Writer, director, and producer Caren Cross is a first-time documentary filmmaker who became obsessed with wanting to figure out why she and others had abandoned their lives in the United States to live in a small town in the mountains of central Mexico.

Caren’s undergraduate degree is in painting. She was diverted from that passion after seeing Frederick Wiseman’s documentary, Titicut Follies, an exposé of the abuses in a mental hospital. Graduate school came next and she subsequently worked for 27 years as a psychotherapist in private practice. Then a one-week vacation in Mexico changed the course of her life again.

After 30 years of pursuing the American dream, she felt compelled to leave it all behind and start a new life in Mexico. Thousands of Americans have inexplicably made the same choice to relocate to the town of San Miguel de Allende. Lost and Found in Mexico is their story. Why do they come? Why do they stay? Why do they find life in a third world country more satisfying than life in the United States? Combing the streets of San Miguel looking for answers, Caren gathers a compelling web of stories. The answers are inspirational, compelling, and incredibly honest.

For more information about the film and to watch a three-minute trailer, click here.

Gina: With the election coming up, I’m hearing a lot of people in the States say, “If Obama doesn’t win, I’m fleeing the country.” As one who has left your home country, do you feel that it’s possible to actually escape?

Caren: I also keep hearing and reading those declarations! When I came to Mexico ten years ago, I came because something in Mexico appealed to me, not because I wanted to escape from something. After a few years it occurred to me that I had changed radically and that it was because I was no longer affected by American culture and I wasn’t part of the Mexican culture. I was suddenly free.

This was surprisingly quite beneficial for me. I hadn’t been aware of how anxious I was, how much I had been driven by a desire to achieve, to look good, to keep up with popular culture, etc. And the worries that I felt in the states were mostly gone. Now, however, the state of affairs in the states is affecting the entire world. The details of this presidential race are discussed constantly in the homes and streets here in San Miguel de Allende.

The outcome of the race is on all of our minds. Most of us care deeply and are helping out in some way and do not feel immune to the state of affairs up north. So, now I would say that one can’t entirely escape by fleeing the country. But one can escape the fast-paced life that leaves little space for relationships and the constant barrage of consumerism and competition.

Gina: How long did it take you to create the film? What was most surprising to you about the process as a first-time filmmaker?

Caren: Well, first of all, I thought that making Lost and Found in Mexico would be easy. It certainly looked easy! What could be so hard? I figured it would take 3 months. It turns out that it took 3 1/2 years! The first thing that I did was to order 6 books from Amazon with titles like, How to Make a Documentary Film. What most surprised me was how many ways there are to construct a film. And getting clarity on what I wanted to portray was quite difficult. More difficult was cutting out witty, entertaining parts of the film that I loved but that really didn’t “fit” under a topic. The editing process took 2 1/2 years.

Gina: What are your favorite and least-favorite things about living in San Miguel de Allende?

Caren: My list of favorite things is really long: the friendliness of both the Mexicans and Americans; the sense of community; the weather; the quality of the light; the ability to do all that you need to do on foot; and the high percentage of interesting foreigners who have come to live here. I guess the main thing is how I feel each day when I wake up. On the negative side, I really miss first-run movies and I miss having the Sunday paper in bed with a cup of coffee. Somehow reading the New York Times on the computer doesn’t quite make it.