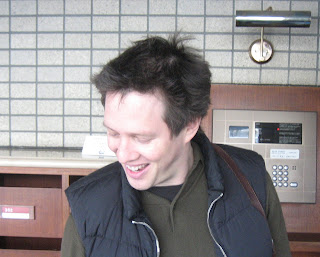 David Samuels is the author of The Runner: A True Account of the Amazing Lies and Fantastical Adventures of the Ivy League Impostor James Hogue. He is a contributing editor at Harper’s Magazine and a frequent contributor to The New Yorker, where sections of The Runner first appeared. A graduate of Harvard and Princeton, he lives in Brooklyn with his wife and young son.

The Runner tells the story of a drifter and petty thief named James Hogue who woke up one cold winter morning in a storage shed in Utah and decided to start his life anew. Reimagining himself as a self-educated ranch hand named Alexi Indris-Santana who read Plato under the stars and could run a mile in under four minutes, Hogue applied and was accepted to Princeton University, where he got straight A’s, made the Princeton track team, dated a millionaire’s daughter, and was accepted into the elite Ivy Club before his deception was finally exposed.

Gina: The vagaries of higher education are on my mind a lot these days, as my daughter starts high school in the fall. I went to San Francisco State University. Through the course of my publishing career, I’ve known a lot of Ivy graduates and seen up close how that club functions…they do rule the world and favor their own and they’re not all as brilliant as they think they are.

I’m encouraging my daughter to aim high with her college ambitions even though we have little savings to pay for tuition and no legacy ties because I don’t want her to be penalized for lack of access to power.

Who mentored you as a writer?

David: I learned how to write comedy as an editor of The Harvard Lampoon and found that the lessons I learned over time were applicable to writing fiction and narrative nonfiction. I am grateful to a number of very generous editors who gave me a chance to write good stuff when I was sleeping on my friends’ couches in New York, particularly Lewis Lapham at Harper’s Magazine and Anne Fadiman, the former editor of The American Scholar. I think I have learned the most about writing over the years from my friend Ben Metcalf, a fellow Lampoon editor who later became my editor at Harper’s.

Gina: You seem to identify with James Hogue because you too were an outsider when you applied to Harvard. Where are you from and what was it about you at 18 that made you a winning candidate for admission?

Gina: You say that you think the Ivy League should be abolished. What do you propose replace it?

David: Nothing. If the Ivy League didn’t exist I think that students and employers alike would be more alive to the range and specificity of particular educational and life experiences rather than simply looking for silly designer labels that promote a fraudulent pseudo-meritocracy that celebrates itself in a frequently nauseating, self-congratulatory fashion while bestowing a parcel of unfair and unearned advantages on their handpicked classes of entitled little snots. That said, I had a wonderful time at Harvard, and wouldn’t be upset if my son was lucky enough to be admitted there. While the classroom education isn’t that great, it is hard to beat the self-confidence that comes from being told at the age of 22 that you have been formally certified as a member of the American elite and can venture forth in the world and tell the suckers how to think and behave.

Gina: You are extremely critical of the practice of preferential admissions treatment of children of alumni, yet your son may well benefit from your status. What are your hopes for his education?

David: I hope he learns to read and write, and that he can connect in a deep and sustaining way with a particular body of knowledge, whether in the humanities or the sciences.

Gina: What are you working on now?

David: A multicultural Jewish-inflected novel about the coin-operated machine business.

Filed Under: education, interviews, parenting, writing • 0 Comments
← For the Love of Our Funky Cheese Shack
A Note from Kim Sunée →