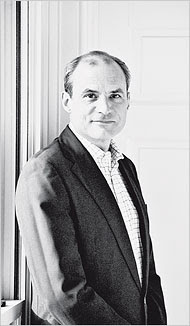 James Collins is the author of Beginners Greek, which the New York Times dubbed “a great big sunny lemon chiffon pie of a novel.” His beautifully crafted, literate romantic comedy was a New York Times bestseller and published in the U.K., as well as translated into French, German, Italian, Spanish, Danish, Israeli, Hungarian, and Dutch.

James was formerly an editor at Time and Spy and has contributed to The New Yorker and other magazines. He grew up in New York City and now lives in Virginia with his family. Beginner’s Greek was his first novel.

Gina: I know this is your first published novel, but had you written other fiction? How long did you think about writing this book before you finally sat down to write it?

James: About twenty years ago, when I was in my late twenties, I was encouraged by a friend to write a short story, really just for fun, which I did. (I can still remember the first line: “On a clear day in early spring, the buildings in New York, seen from a distance, seem oddly still, flat and unreal.”) Other than that, though, I had written no fiction since twelfth grade before starting work on the novel.

I guess you would say that I had been thinking about writing a novel since I was seven years old. As for this novel specifically, there were a couple of germs of ideas that I was turning over in my mind for a couple of years, but I didn’t really concentrate on the book or start thinking it through until I actually started writing it.

Gina: How did your background as a journalist and editor impact your approach to the novel?

James: I think my experience as a journalist and editor was important in a variety of ways. Most simply, the training of writing on deadlines helped me to force myself to get the words down, even if I was struggling. Then, I had had a lot of practice cutting and rewriting pieces quite dramatically, heartlessly and quickly, and having those muscles, I think I was able to work over the manuscript of the book much more effectively. I think too that it was good to have written a lot of expository prose. That was especially useful in my case, since the novel is in the third person and it has fairly long expository passages, but in almost any novel except the most impressionistic the writer is presenting information or making an argument at certain points, so being able to write expository prose well is a good skill to have, even if you use it only to make the skeleton of the passage.

What I have said above relates to the mechanics of writing, but I’m sure the reason you asked was because you were interested in the broader and deeper ways in which working in journalism affected my writing of the novel. That’s harder to describe. I guess the simplest thing to say was that journalism reinforced the bias I already had toward narrative and realism. In journalism you go out and find out stuff about the real world and then you use that material to tell a story. I enjoyed doing that and I suppose that over the years I became more convinced that in novel writing, too, it was important to tell a story and to bring in aspects of the real world, or at least for the author to show some knowledge of the real world. I am not dogmatic about this, and Beginner’s Greek is by no means totally realistic, but overall, I prefer novels in the realistic, narrative tradition.

Gina: What were your models/inspirations for the structure of this book?

James: My inspirations for the structure were Shakespeare, Wilde, Wodehouse, Lubitsch, Preston Sturges, and any number of others. Really, I just took what I thought was the basic structure of comedies: two young people in love; perhaps another couple that serves as a contrast to the first; complications and twists and surprises.

Gina: I find the cover of the hardback to be singularly appealing and I’m not entirely sure why. Retro, yet not and the surprising green hair. Did you have a hand in the design?

James: I agree that it is a wonderful image: sort of pop and bold but also elegant. I can’t take any credit at all for it, though.

Gina: Have the movie rights sold?

James: There have been discussions but nothing has happened.


James: I have just begun work on what I think is a promising reported story for the New Yorker, and I hope that works out because I definitely want to continue to do journalism. Then I have a lot of ideas for fiction and have started working on a couple of things, one which would probably be a story and the other a shortish novel. They are set in New York among the same kind of people as the characters in Beginner’s Greek, but they aren’t comic—to the contrary, in fact. One reason people seemed to like Beginner’s Greek was that it was so optimistic, and I worry about alienating my legions of fans by revealing my true pessimistic self, but for the moment I’m carrying on.