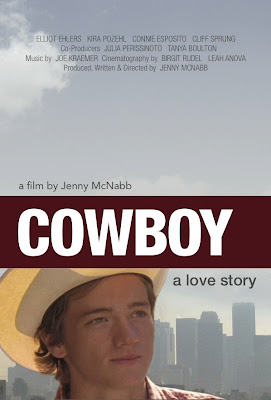 Feb. 27, 2009 UPDATE: Click here to hear a podcast of Jenny talking about her film, new distribution deal, and upcoming plans.

Jenny McNabb is the director, writer, and producer of Cowboy, a short film about an unconventional young ranch hand who travels to the city to win back a forbidden love. Previously, she worked as a travel writer, editor, and photographer for Lonely Planet and Fodor’s, living in and writing about destinations as varied as Belize, London, and Finland. She and I became friends 11 years ago at the Book Passage Travel Writing Conference.

Studying screenwriting at the University of California, Los Angeles, Graduate School of Film and Television, Jenny distinguished herself as an able producer as well as writer. She received UCLA’s Graduate Screenwriting Fellowship, the William Morris Fellowship, and the Jack K. Sauter Scholarship.

Jenny’s filmmaking draws on her passion for the absurd, her love of adventure, and her unique appreciation for and sensitivity to different cultures, the legacy of many years of living and working abroad.

Currently, Jenny is in pre-production on her next short film and finalizing the script for her debut feature.

Gina: I’ve been hearing about Cowboy for at least a couple of years in your holiday letters. The credits for the film include dozens of people. It seems like an incredible amount of effort for a 5 minutes, 24 seconds-long film that very few people will likely ever see at film festivals. Are short films the marginalized poetry of Hollywood and/or were you thinking of it all along as an audition stepping stone to lead to full-length features?

Jenny: These are good questions. I made the short for two main reasons:

(1) to learn/gain or improve my skills as a director: directing actors, choosing and planning shots, moving the camera, editing, etc. are all things I’ve found I have to try for myself (and fail at) before I figure out how to do them successfully.

(2) to begin building a body of material that I can give to agents, managers, financiers, producers, etc. when I am shopping around a feature script of mine that shows my skills as a director.

Reason (3) — to have fun! Which I had a ton of. I love producing and directing (I love writing and editing less, because they are much more challenging for me). I don’t know how many people contributed in total, but that’s the chief joy of being a writer/director — being able to build a team (or family) of collaborators. I love doing that — the good ones always bring so much more to whatever it is I’ve come up with.

So that’s reason (4) to make one or more shorts: to find people I can take with me film to film, and develop our style of working together. For example, on this short, I had two composers score the film unsuccessfully before I found Joe Kraemer, who I love, and who did such a lovely score for the film.

Ideally, I’d like to work with the same cinematographer, editor, composer, from film to film, because it’s really sweet when you can shorthand what you want and just say, “Hey, do that thing here that will be like that thing we did on the last one.” (My actor and I got like that by the end of this shoot — I’d just say “do that other thing like before” and he’d nail it.)

Myself, personally, I’m less interested in how many people see this film or where, for one because I’ve lived with the film for so long that by the time I’m done editing and mixing and whatnot, I’m fairly tired of it, and more preoccupied with the next one, and just want to send it out in the world, wish it all the best, and hope it finds its place.

That said, overall it’s great to get a short into certain festivals, because these are great places to network. Another reason to play at festivals — I’d like to see the film play on a big screen with at least one audience, so by their response I can learn where my pacing worked and where it didn’t — a film plays very, very differently with a room full of people watching together, vs. one or a couple of people watching on a TV at home. I am especially curious how this film will play on a big screen — I am 99% sure I started one of the music cues in the wrong place, and it will be interesting to see if the audience reaction will bear that out.

Just an aside — This short film took a particularly long time because I was kind of feeling my way through so many steps of the process. The next short, we can probably get done in about four months.

As well, the next short I make will be timed to go out on the festival circuit when I have my feature script ready to shop around, which is a strategy designed basically to get the feature script into the hands of people who can help me get it made.

It might be unfair to say that shorts are marginalized poetry in Hollywood — for example, Sundance had over 6000 short film submissions this year for something like 50 slots, and the reason why so many people were competing for those slots is that a good short, shown at a top festival, can really help further your career — IF you have a follow-up project, a feature, ready to go. This is the truth of the matter: If you have a great short, it shows at top festivals, and you have no follow-up project that’s feature length, you’re not going to get very far. Of course, there are always exceptions to that rule!

Gina: How does your experience as a travel writer and editor influence your approach to film?

Jenny: I find that my background as an editor helps as well as hurts when I’m writing. I have a very clean pared-down writing style when I’m working on a script, but sometimes that desire to sit and play with wording for a single sentence for an hour is counterproductive to just getting a fucking first draft done. In the early stages of writing, I fight hard to silence my inner editor so that my creativity can flow freely.

Some of the stories I’d eventually like to tell are drawn from having traveled, experiencing different cultures and being open to them. I guess the inquisitiveness that led me to become a travel writer is the same inquisitiveness I direct towards telling fiction stories on film.

Gina: There’s a scene in your film with a cow in a house. Where did you find the cow and how did you get her in the house?

Jenny: I was originally going to have a friend who lives north of me in California cattle country, who I’d met at rodeo school the previous year (she was in saddle broncs, I was doing bareback broncs, and we were the only two girls in a group of about 80), borrow one from a neighbor’s ranch. I went and pulled all the filming permits (a very long, complex procedure) and then the plan fell through — when you pull
a cow off an 80,000 acre ranch, it’s pretty wild, and for the safety of the actors, equipment, crew, etc. we decided not to have her bring it down. We were days away from the start of the shoot, and everything else was set, so this was quite a panic!

Fortunately, when I was doing preproduction I’d called professional animal wranglers just in case I needed some sort of backup, so I got back in touch with the one I liked, and hired him. Spotty the cow came with her own trailer, two handlers, and her calf (who stayed in the trailer while she worked) and was a true pro. She was the most experienced actor on our set — she’s been in California Cheese commercials and a bunch of other stuff.

We shot with the cow one day, two locations, and we had been incredibly nervous about “cow day” — because we had such a limited amount of time with her, and had to get everything we needed in terms of shots at both locations. For her scene in the kitchen (the house interiors/exteriors in the film are of my house), I had friends help me build a special ramp for her to walk up and stand on. It felt very “Waiting for Guffman” building our ramp and waiting for our cow.

Gina: You’ve been slogging away in Hollywood for a decade now. I know it’s not easy. What keeps you going?

Jenny: It’s true I’ve lived in LA for about a decade, but after I left film school I took a very, very long break from having anything to do with filmmaking — it was personally a very painful time for me, and I felt creatively exhausted and like I needed to explore some of my other interests. I worked for a fashion designer, a yoga studio, and at a middle school for low income kids — which were all deeply enriching life experiences. So in a way, right now I feel like in terms of filmmaking, I’m brand new and just starting out.

Jenny: I don’t have a website currently, but plan to have one soon. The DVD of the film is available for $10, and I accept payment through Paypal. Contact cowboyalovestory@earthlink.net.