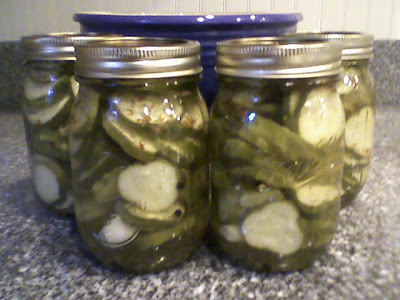 …I promise I’ll stop talking about pickles soon, but as fate would have it, this afternoon at Happy Nails (which, by the way, is far more pleasant than Lucky Nails) while my toes were being painted Sit Under The Apple Tree green, I picked up the June/July issue of Domino and read an illuminating interview with haute pickler Rick Field. He recommends three of my favorite artisan food companies: June Taylor Jams, Real Pickles, and Hawthorne Valley Farm.

He offered this excellent tip: When the Mean Beans are gone, take thinly sliced carrots or daikon and place them in the jar with the remaining liquid. Refrigerate for four days and you’ll have “yummy, zesty” veggies. I have never actually bought his products even though they look so appealing because they’re so freaking expensive, but this culinary recycling tip might be enough justification to push me over the edge. I do like a spicy pickled green bean.

Plus he mentioned a really interesting sounding book: Pickled: Vegetables, Fruits, Roots, More–Preserving a World of Tastes and Traditions by Lucy Norris. She doesn’t seem to have a website, but here is an interview with her about Asian pickles. Turns out she was a founder of the New York Food Museum’s New York City International Pickle Day, which is coming right up on September 14th on the Lower East Side.

Filed Under: Berkshires, cooking, summer • 0 Comments
← In a Pickleless Pickle
Nani Power's Feed the Hungry: A Memoir with Recipes →