Gold Diggers of 1933 at Bard Summerscape 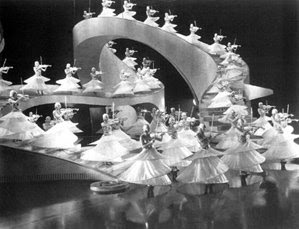 Bard Summerscape’s handsome brochure landed in my mail box today. The cultural festivities include a film festival dedicated to “Cinéma Transcontinentale: America, Russia, & France in the 1930s.” Gold Diggers of 1933 sounds terrific. I love the photo.

Gold Diggers of 1933
1933, directed by Mervyn LeRoy
This is easily one of the most remarkable Hollywood musicals to use the Great Depression as a backdrop and plot element, most notably in the number “Remember My Forgotten Man,” featuring lines of unemployed ex-servicemen. Generally, though, the mood is lighthearted and hilarious, especially when then-newcomer Ginger Rogers sings a chorus of “We’re in the Money” in pig Latin, wearing a costume of dollar bills. Dick Powell, Joan Blondell, and Ruby Keeler star in this dizzy showbiz comedy, choreographed with surreal flair by Busby Berkeley.
96 minutes
July 13 at 7 pm